Rewind my personal time line sometime to 1993. NC State Engineering professor Dr. Willis showed me Linux. It was full of command line this and command line that. I felt like he was excited to step back 5 years in the GUI world I was comfortably living. He of course was a big UNIX user so a free OS was a very exciting option. 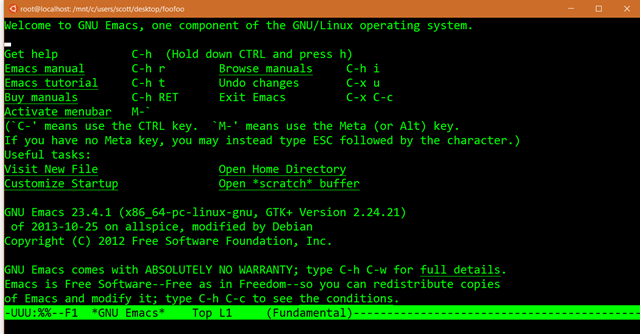 Fast forward to today’s world. Linux is still around, not really for the average user per se, but very popular with the technically elite. Personally I have avoided it since that day and have never like dealing the typo prone command line user experience.

However as node has become the platform to build modern web front-ends there have been a few modules and tools that have been off limits. This includes SASS compilers and some image optimization modules.

Now that Windows 10 supports the Linux Bash shell these tools now become available to me and anyone else to develop on Windows.

This might not be the reason why you spent $3000 on a MacBook, but it certainly eliminates many reasons developer choose MacBooks as their development box.

Microsoft’s goal is to make Windows the developer’s platform. Bash support bridges that gap in a big way. Now all the Linux tools and utilities they love can now work on Windows too.

This hardened Windows user welcomes the support and my future new developer friends. Also to those new friends, welcome to the world of touch!